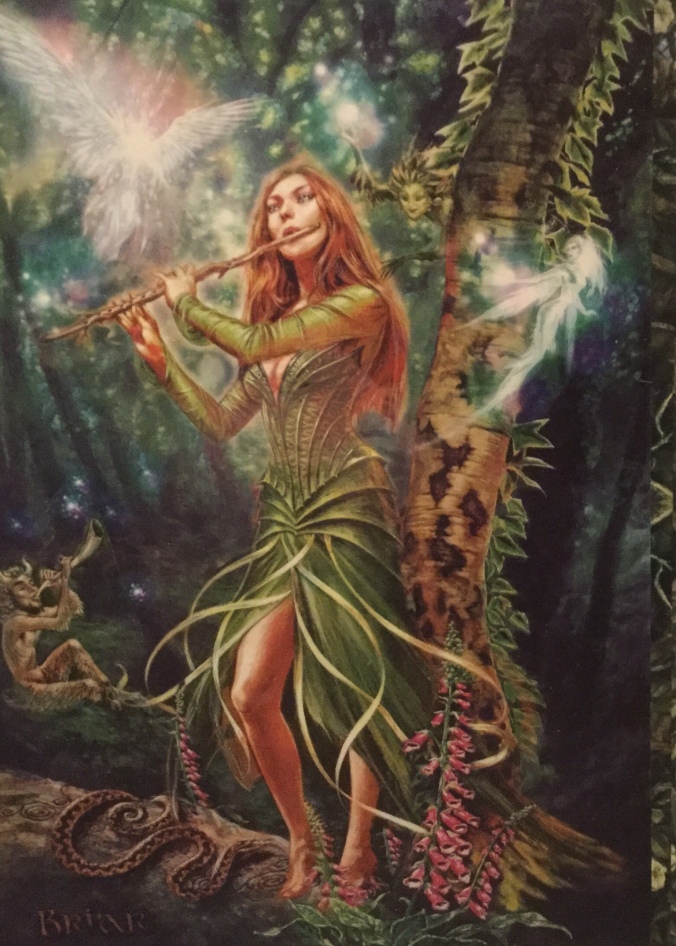 Here is the last post card I bought with a green theme to put up in my workspace. I chose this picture simply because I play the flute myself. I play the ‘normal’ flute, but haven’t done so in over a year now. I also play the Native American flute.

I kind of bought that card to remind me that I used to have such fun making music. Especially the Native American flute is so easy to play. I own several. Last year, about this time, I went into the forest to do a flute meditation and some deer 🦌 came to listen to me. I wrote a blog about it at the time. The image on the card reminded me of that. It was such an amazing moment in the forest, just playing with my eyes closed and all for sudden there are these deer just standing in front of me and listening. I wasn’t even scared, I just felt calm and amazed. They knew I didn’t mean them any harm and they were a patient audience. I often think back to that day and keep thinking I need to repeat that. Just like in the image were the forest creatures come to listen to the fairy play to them. I wish I could look like that though 😉

Thank you @brosh.for.you for this beautiful brooch.
Last Saturday a friend of mine left me several drunk voice messages on whatsapp. He is always so proud of being honest. But what he was actually saying was quite hurtful. He said things, a friend should not really say to another human being. Maybe it was his truth and how he sees the world, but to me it just sounded righteous. #truth #right #righteousness #righteous #friends #notfriendsanymore #hurt #feelinghurt #thingsyoudontsay #silenceisgolden
Got caught in a thunderstorm ⛈ whilst cycling. But I loved it, at least I didn’t sweat 😓 I love cycling through the forest and forgetting everything else. It makes me happy 😃 #cycling #mountainbiking #outdoorgirl #summer #thunderstorm #dirty #muddy #loveit #exercise #nature #legs #summerrain enjoy #goodforthesoul #domoreofwhatmakesyouhappy
I love the new Pink song: That’s all I know so far. It really captures what life is all about. I can really relate to those lyrics. Love it 🥰 #song #pink #thatsalliknowsofar #truethat #feelit #skinfullofscars #lifeisnotsllrainbows
Found this treasure in the book cupboard in Frankfurt today 🥰💛 Murakami is my favourite author. I‘ve got all his books in English, but it would be nice to read it in German, just to compare.
Looking forward to reading this soon. It’s about female writing in the footsteps of Virginia Wolf. Creating spaces and time to write, but also about personal freedom to write. Very excited 🤩 written by #judithwolfsberger #schaffteuchschreibräume#reading #writing #schreiben #kreativesschreiben #virginiawolf #ilovereading #ilovewriting #beingbilingual #author #beingawriter #schriftsteller #schreiben #bücher #bücherliebe #booklove #memoir
Loading Comments...
Comment
×
%d bloggers like this: